It was ABIE’S first Business Leaders Roundtable, held on Wednesday June 24. Titled ‘Unlocking European-Australian Potential’, the speakers shared their insights gleaned from the crisis and how they managed the challenges of doing business over the past months.

It was a Zoom webinar which attracted 100 participants from companies in Europe and Australia across a wide range of sectors and included representatives from the Embassies, Austrade and bi-lateral Chambers of Commerce.

Jason Collins, CEO of the European Australian Business Council, and part of the ABIE Group network, joined from Canberra to moderate the round table. “Now more than ever governments and businesses need to be working intensively to manage the pandemic and to identify the enablers for our economies to move forward again. The roundtable session has brought together leading Australian and European companies who are each confronting the challenges of mobility in different ways – in the healthcare, aviation, public transport, and agrifood sectors.

Evangelos Kosopoulos opened by describing Australia-based Sonic Healthcare as a medical diagnostics company which runs large laboratories in 8 countries, employing 37 000. He explained that the company was the first laboratory in Europe to test for the virus in late January. Capacity was then ramped up fast as the world struggled to find COVID 19 tests.  He said that by late February the company was “in the eye of the storm”. To date the company has tested many millions of people around the world.

The group was the first in Europe to set up testing through nasal swabs, followed by molecular diagnosis.  “It was an avalanche of testing”, said Evangelos.  “We had a large part of our staff working around the clock.’

“On a lighter note, our testing helped Germany’s soccer league, Bundesliga, to go back to competitive play as the first professional sports league in the world”.

It has been an inverse experience for Kjell Kloosterziel. whose company runs airports around the world including in Brisbane and Tasmania. Speaking from the Netherlands, he said air travel had been hit very hard.  Despite this, most airports were kept open.  The main challenge was cash management with cash being generated through bond issues.  “It was very hard on our staff”, he said. So far the company has not been forced to let anyone go.

An optimist, he thought he could see the first signs of recovery.  “This is a marathon – not a sprint though”, he warned. ‘It will be 3 to 5 years before we reach the level of pre-Covid. But we must focus on recovery.”

Keolis, a public transport and mobility solutions company with a global reach, had a 6.5 billion euro turnover last year, and carried 3.4 billion passengers a year.  Then, with lock down, public transport ground to a halt.

Bernard Tabary pointed out three lessons could be drawn from the crisis.

.         Agility.  Learn how to plan with the unpredictable “It is not so much planning, as agility that we need.”

The next step for Keolis?  “Making public transport acceptable”.

Bernard praised the Australian Government’s handling of the pandemic.  “What I’ve seen in Australia has been excellent preparation and solid governance, a coming together of State and Federal Governments in a positive way.”

The crisis saw business soaring for Nufarm, an Australian giant in the agricultural business operating in 100 countries.  Demand grew by 100% a day.

“Not one part of our business was hit by COVID 19”, said Jon Acarregui Bilbao. “Demand kept coming, but for different products, mirroring the consumers’ changing eating habits because of the virus.

“We had huge demand for everything containing Vitamin C – oranges, lemons, strawberries and fresh fruit and vegetables. We had complete freedom to supply throughout the EU, despite the lockdown.

“Our biggest challenge was to set up home working.”

The exchange ended with valuable insights into COVID from Evangelos, who explained that uncertainty in testing was typically not the result of the test itself, but often of the way the swab was taken.  He said it was an unpleasant test and had to be correctly done by well trained staff.

Another problem was that the viral load changed, so timing of the test was critical. Testing too early, or testing too late gave a misleading result.”

He warned against quick home tests being sold on the internet, saying their quality was appalling. Describing “antibody passports” as nonsense, he explained that scientists were not sure yet that having COVID 19 anti-bodies gave immunity.

Summing up the wide-ranging discussion, while some could be seen as winners in this crisis, and others losers, all agreed that managing cash in troubled times was vital to the viability of their business.

In her closing remarks and vote of thanks, Maya Joshi, the current Chair of the ABIE Group, which comprises 16 organisations in Europe and Australia, noted how the sudden confinement had forced the group to come up with innovative solutions to keep in contact with its members through a series of webinars.  These have opened up the network and facilitated interaction with a wide range of people and companies.  Today’s Business Leaders Roundtable will hopefully be the first of a series. 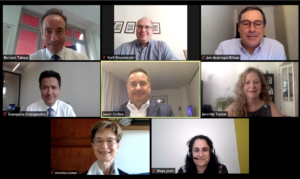