ABIE’S June 3 webinar, The New World of Working from Home, dovetailed well with our discussion, held a fortnight previously, on the operational challenges facing both managers and employees during the Covid-19 pandemic.

While one examined the legal side of the virtual office, exploring benefits, rights and pay, The New World of Working from Homelooked at the human aspects of the radically changing workplace.

The discussion was led by ABIE Board Member and gender equality strategist Kelly Saunders, whose recent work includes a series of ethnographic interviews exploring men’s experiences working from home during the pandemic.

Kelly opened the discussion with extracts from her research, saying that there were many factors which impacted on men’s experience of flexible work during Covid-19.  Top of the list was the presence of young children at home which was an empathy building experience for many, difficult yet humanising.  Children coming in and out of the Zoom frame somehow softened people. Men who have worked long hours in an office all their lives understood something more about life at home with a child.

Illustrating her words was her small daughter Albertine, who put in an unscheduled and unphased appearance.

Siobhan Martin said she had noted changes in attitudes.

“For many men it is the moment when they truly understand what goes on in the home and the amount of energy and effort that has taken.

“It has challenged some men’s view of their role.

“For some of our women it’s a moment when they are feeling much more included. Those glass barriers are being removed.”

Others have undoubtedly felt the full brunt of the double burden of children and work. But how will the work world be permanently altered after the COVID 19 crisis?

Attitudes towards place and space, the speakers agreed, would change with less importance placed on the large central city office. Flexible working would become an integral part of business, with a move towards less office space and more home space.

“Hot desks” used periodically by a number of employees, would replace the private desk as the office transitioned from a place where the majority of work was done to place to socialise with colleagues.

The speakers said they had seen a mixed reaction to working from home.  Some employees found the experience positive, others did not.

Siobhan Martin made an interesting observation regarding productivity:  “This is where the focus on outcome is vital.  Moving from ‘how much time he or she spent on the task, to what has been achieved.  Our experience is that managers who outsource their human relations aren’t doing so well.”

The negative impact of isolation was also explored, prompted by  webinar guest Sarah McGrath, the Australian founder of Women for Women France. The charity helps non-French speaking women in domestic violence situations seek help in their own language.

She said sobering statistics showed a 36% increase in reports of domestic violence in Paris since lockdown. Domestic murders in the UK have trebled.

The panel noted the critical need for employers to be alive to this. There is a need to talk about it, build connections to excellent groups with refuges, counselling, safety advice and legal support.

Cybersecurity issues came under scrutiny, with a call for better education on security matters for those working on home computers.

On September 16, ABIE will explore this topical subject together with the OECD.

What was clear for the international audience, which included ABIE members from France, the Netherlands, Croatia and the Czech Republic, was that the world of working from home is, for many, here to stay. 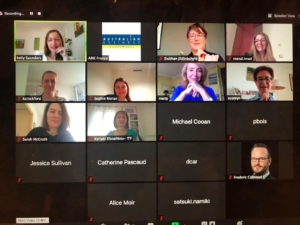