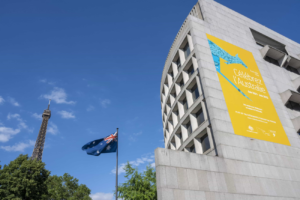 Australia now France continues into 2022 with numerous events celebrating Australia’s creative excellence, diversity and innovation. Currently on display at the Château de Malmaison, the exhibition Malmaison: stopover in the southern lands. From the Baudin expedition to Jonathan Jones (12th January-18th April), by the Australian Aboriginal artist, Jonathan Jones, addresses issues such as the notion of restitution, collective healing processes and the colonisation of Aboriginal knowledge. Piinpi: Contemporary Australian Indigenous Fashion (31st January-19th April), created by the Bendigo Art Gallery and currently exhibited at the Australian Embassy in Paris, shines a light on Australia’s leading First Nations creatives and the power and diversity of the rapidly growing Indigenous fashion and textile industry. From the 23rd March to the 1st April, The Sydney Dance Company, directed by Rafael Bonachela, will perform Ab[intra], Latin for “from within”, at the Chaillot – Théâtre national de la Danse in Paris. Australia’s excellence in science and innovation will also be showcased through two events in March at the Australian Embassy in Paris:  VR screenings of Beyond the Milky Way (7-11th March) and an exhibition entitled Eureka! Scientific Australia (3rd March-30th June). Other highlights of the Australia now programme include the exhibition Reclaim the Earth (15th April-4th September) at the Palais de Tokyo, which will follow the trajectories of artists with a different approach to “natural” materials, and the retrospective exhibition Destiny – The art of Destiny Deacon (4th May-2nd September) at the Australian Embassy in Paris, which will focus on 30 years of Destiny Deacon’s career as a contemporary artist – for the first time to a French audience. For more information about the Australia now programme, click HERE. 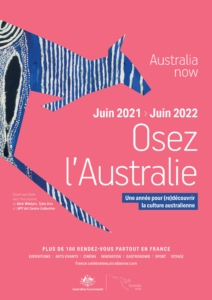