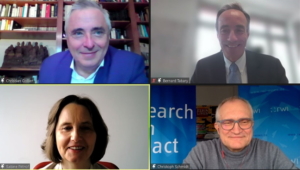 With an acceleration of efforts by the European Union (EU) to reduce greenhouse gas emissions and Europe’s potential energy shortages following recent events in Eastern Europe, it was no surprise that this was the focus of the joint online roundtable organised by the Australia France Business Association (AFBA) and the German Australian Business Council (GABC) on the 29th March 2022. Entitled “The sustainability transition in Europe and opportunities for Australia”, the roundtable brought together two eminent economic experts: Australian-born Professor Christoph M. Schmidt, President of RWI – Leibniz-Institut für Wirtschaftsforschung and Chair of the Franco-German Council of Economic Experts (FGCEE) and Professor Christian Gollier, Professor of Economics and Director of the Toulouse School of Economics and a Member of the FGCEE. The roundtable was moderated by Sabine Pittrof, Chair of the GABC and Bernard Tabary, President of AFBA. Professor Schmidt opened the discussion with a poignant statement that  “climate change is the greatest challenge to face humanity in the 21st century”. It is now essential, he said, to “curb emissions quite drastically” if we hope to “reach a plateau in the path towards higher temperatures”.The Paris agreement of 2015 was a milestone in this regard because it gave the international community a target to limit global warming to well below 2°C compared to pre-industrial levels and to pursue efforts to limit it to 1.5°C. “Europe sees itself at the forefront of international efforts to reach this objective”, Professor Schmidt declared. Recent years have seen an acceleration of efforts in the EU towards the energy transformation with the European Green Deal, setting a binding target of achieving climate neutrality in the EU by 2050 and reducing emissions by more than 55% by 2030, compared to 1990 levels. Professor Schmidt highlighted several efforts made by the German government to mitigate climate change including a landmark ruling by the German Federal Constitutional Court in April 2021 which declared that the current German Climate Protection Act is partially unconstitutional because it does not specify greenhouse gas emission reduction targets beyond the year 2030. In 2021, Germany also introduced a National Emissions Trading System to fix carbon pricing in the fields of heating and transport. On the topic of the war in Ukraine, Professor Schmidt underlined that “Germany is particularly vulnerable”. Putin’s regime is financed by oil, gas and coal reserves that are sold to the West and Germany receives more than 50% of its natural gas and oil from Russia. He believes that economic sanctions may help stop the war in Ukraine but it is not a certainty. Short and medium-term solutions include shifting to coal and nuclear, reducing demand, particularly in the chemical industry and diversifying Germany’s energy sources and integrating carbon pricing into the European trading scale. In the long term, creating energy and technology partnerships with other countries will help Germany meet its climate goals. As an example, he explained that Germany had recently signed a Hydrogen Accord with Australia which will see the two countries invest in a series of new initiatives to accelerate the development of a hydrogen industry. This will include exploring options to facilitate the export of hydrogen produced from renewables from Australia to Germany – ‘shipping the sunshine’ as it has been labelled. France on the other hand has pursued a very different path from Germany in terms of energy policy, explained Professor Gollier. “France put in place a nuclear electricity industry in the 80s and 90s so that 75% of electricity production comes from nuclear and renewables and hydro. Today, more than 90% of electricity is nearly fully decarbonised”, he said. The decarbonisation in France has led to some major issues including the rising cost of electricity, a NIMBY effect towards onshore and offshore wind turbines and the yellow vest movement which was triggered by the carbon tax put in place 6 years ago. In 2019, the Réseau de Transport d’Électricité (RTE), the electricity transmission system operator of France, was requested by the French government to prepare a study on the evolution of the power system in France. The study provided six different scenarios on how to obtain net-zero emissions target by 2050 and revealed that the total annual cost would be marginally smaller by using the maximum amount of nuclear power in France (53%) rather than renewables. R&D will also play a key role in combatting climate change, in particular the development of batteries and hydrogen networks and technologies to sequestrate CO2 from the atmosphere. An interesting discussion ensued between the two speakers on the topic of nuclear electricity –  Professor Gollier declaring that Europe needs to reconsider its position towards nuclear energy and Professor Schmidt responding that he doesn’t see Germany reversing its anti-nuclear stance in the near future. As he concluded, “Europe’s model is unity and diversity”. In response to a question on whether European policies will influence Australia to change its policies on sustainability, Professor Schmidt reiterated the importance of the German-Australian hydrogen partnership. “Energy is currently very expensive in Europe and that should incentivise other parts of the world such as Australia to sell energy solutions to European governments”, he said. In his vote of thanks, Bernard Tabary thanked the excellent speakers and Sabine Pittrof for co-moderating the webinar. He particularly thanked the GABC for partnering once again with AFBA and looked forward to organising many more joint events together. Author: Isabel Kerr